You may have noticed a not so subtle change to an infamous Hazel Dell landmark. Wedged between I-5, 78th Street, and Highway 99 the Value Inn is well known to nearly every firefighter and paramedic at District 6. And well-known for all the wrong reasons. The ramshackle old hotel had become a haven for drugs and addicts. “Drugs everywhere, crime scenes, the police were–they were even scared to come here, it was just awfulness,” says James Kasper. He would know. The value was where he came to drink and get drunk, racking up DUI’s and various charges that landed him in court and behind bars. “They were done with me,” he says. “I was going to kill somebody–vehicular homicide, driving drunk, you name it.”

But that was a long time ago. Now, both Kasper and the Value have changed–together–for good. Kasper has purchased the derelict 60-room hotel and is converting it into a recovery community where those trying to stay clean and sober have a clean and safe place to live. “You’re going to know when you walk out your front door that your neighbor is clean and sober,” Kasper says. “It’s for women and children, or men and children, and I want them to have a beautiful fresh new life.” 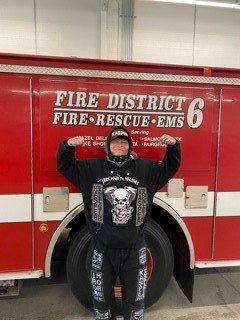 Kasper recently toured the three stations of Clark County Fire District 6. He spoke to crews about his life and transformation, as well as the transformation of the old hotel. Many many crew members listening to Kasper had known all too well of the goings-on at the Value. While she was a line firefighter Chief Kristan Maurer had many visits to the Value, most calls involving overdoses or other drug-related maladies. “I attended a meeting where he spoke to the Hazel Dell Salmon Creek Business Association, and I think when he first started to speak most people in the audience were skeptical,” says Chief Maurer. “But by the time he was done everyone was excited and super supportive of what he’s trying to achieve.”

Kasper says he’s been clean and sober for nearly 19 years now, and the tavern he took his last drink just happens to be next door to the Recovery Center. And it too has been purchased by Kasper and now is the Ironhorse Meeting Center. The old Icehouse tavern has served it’s last drink. It’s now a gathering place for AA meetings and other support groups. Kasper has his hands full with this project, his Ironhorse Center on Fourth Plain, and his Sandblasting business. If you think like that sounds like an overwhelming schedule, well, you obviously haven’t meant James Kasper. “There’s more people that need a place to live that are clean and sober than there are beds. So my mission is to make that change. Lots of people want to help, some talk about it, some be about it. And so I’m being about it.”